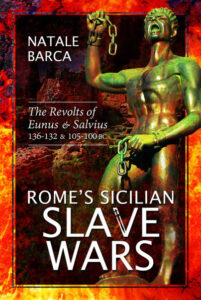 Most of us have heard of Spartacus who initiated a slave uprising against Rome and led them a merry dance until brutally suppressed. But as Natale Barca highlights, Spartacus was not the only slave to do so. Barca focuses on two rebellions on the island of Sicily during the Roman Republic, at least one of which caused greater problems to Rome than even the mighty Spartacus. This book is therefore the story of often heroic resistance against overwhelming odds even if it was ultimately futile, and it is one worth reading.
BUY NOW
Barca begins with the background of the Mediterranean slave trade, the prevalence of piracy in the region, and Roman army participation in acquiring the hundreds of thousands of slaves they needed to keep their economy churning. After touching on the peculiarities of Roman slavery, Barca works his way into the slave rebellions. Early efforts at mass slave resistance were episodic, but Barca acknowledges that the lack of evidence for rebellions does not preclude other rebellions taking place in the burgeoning empire. That brings him to Sicily.
Sicily provided the backdrop for the drama to follow, and Barca takes us on a tour of an island steeped in Hellenic history long before the Romans took full control in 212 BCE and turned it into Rome’s granary. Of course, that relied on slave labour, but the Romans treated their slaves in Sicily brutally and corruption was rife. Braca thus paints a picture of almost inevitable revolt. Enter Eunus, a self-proclaimed prophet and follower of Dionysus, god of the oppressed. He inspired a rebellion at Henna in 135, which initiated a monarchy across western Sicily with Eunus as its king, now named Antiochus. Barca describes this kingdom and its army, both established along Hellenistic lines.
Rome’s initial hubristic reaction, as a police action, failed miserably. The revolt spread, but not everywhere, and this time the Romans would send in the army. The first serious military interventions failed too, but Barca notes, Rome might lose battles, but not wars. And so it proved in 132 when the Romans took Henna and captured Eunus who died in captivity, evading the gruesome execution Rome had planned for him, though many of his followers did not prove so ‘fortunate’.
Fast forward to 104 BCE and a second major slave insurrection. This began for different reasons, though the background remained much the same, and the course of events proved similar too. The Romans under-reacted, were defeated, then found a way to win, which they finally did in 99 BCE. The epilogue for this rebellion was that one thousand survivors were sent to be killed by wild animals in Rome, but they committed suicide to a man instead. Barca concludes with some thought on why these revolts took place, before adding an appendix on Spartacus and a chronology of events.
This is a well-researched and well-written book about two slave uprisings that have stayed too long in the shadow of Spartacus’ more famous rebellion. Barca places these events into their local and broader contexts, illuminating the struggles of slaves under the thumb of a horrific regime. Some nods to Marxist theory are not very helpful, but they are understandable, and should be weighed against the glorification of Rome that is all too common in recent historiography. Military history students will enjoy this book too. Barca’s observation, that Rome might lose battles but not wars, applies all too well to Sicily’s slave wars, which, in the end, were valiant efforts but doomed almost from their inception.