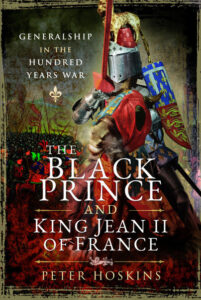 The Black Prince, heir to the English throne, and King Jean II of France met in Battle at Poitiers in 1356. This was a significant engagement in The Hundred Years’ War, a series of conflicts between France and England from 1337 to 1453. Peter Hoskins notes immediately how much the two men had in common, yet one emerged victorious while the other became a humiliated prisoner of war. His book attempts to answer why that happened with an emphasis on their generalship and character.
BUY NOW
This is a book in three parts. The first sets down the two biographies of the Black Prince and King Jean II. That provides the necessary background to follow Hoskins’ analysis while giving him the opportunity to prepare quick character sketches. Part Two describes the principles of war and command and leadership in the Hundred Years’ War. He starts that with a consideration of generalship and the conduct of war through the lens of Sun Tzu’s Art of War, which seems incongruous at times as Hoskins recognises in passing. He is on much firmer ground with Vegetius’ The Epitome of Military Science, and he just about skirts charges of anachronism with his third framework, the principles of war used by the modern UK forces. Command, Hoskins concludes, was the preserve of the nobility; commanders had to be courageous and disciplined, and they had to project their personality onto their armies, but that did not always guarantee competence.
Hoskins moves on to the campaigns of the Black Prince and King Jean II in Part Three. For the Black Prince, those were the expedition in France of 1355-56, leading to the Battle of Poitiers, and the 1367 campaign leading to the Battle of Najera in 1367. Jean comes under Hoskins’ microscope for the sieges of Aiguillon in 1346 and Breteuil in 1356 before bringing him to Poitiers and his fateful meeting with the Black Prince. Hoskins does all this in chronological order. At Aiguillon, for example, Jean lost focus on his primary objective, while on his 1355 chevauchee, the Black Prince demonstrated quite the opposite faculty, keeping his eyes on his prizes. The Battle of Poitiers – an event that occupies the central place in this book – emphasized the qualitative differences between the two commanders, Hoskins argues. He continues his narrative and analysis into the campaign of Najera in 1367 and the Black Prince’s last great victory. Hoskins concludes with his theory on the location of the Poitiers battlefield.
The Black Prince and King Jean II is an enjoyable narrative history with some cogent analysis of command in the Hundred Years’ War. His clear writing makes it easy to follow Hoskins through a complex period, and the double-sided biographical introduction is a clever way to lead into the heart of this study. There is perhaps too much narrative at times for some of the operations where more analysis would be welcome. The inclusion of the Najera campaign also felt unnecessary; the climax of the book is clearly at Poitiers. Nevertheless, Hoskins’ even-handed approach to his two major protagonists produces a balanced account that is well worth reading.