A Confusing State of Affairs 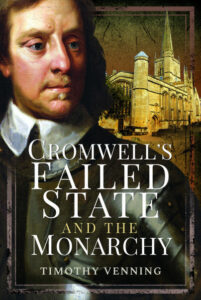 In Cromwell’s Failed State and the Monarchy, Timothy Venning discusses the post-war period from 1646 to 1655. It is a detailed rollercoaster ride of war and politics, and one not for the casual reader.
Venning launches into his book with an overview of possible outcomes to the Civil War, all of which had their problems. Given all the factions and personalities involved, that was hardly surprising. At the centre of all this was what to do with the obstinate Charles I. When he tried to reignite the fires of civil war, his fate was sealed in most quarters. Venning covers Charles’ contentious trial and execution in 1649, before moving into a Republic with decidedly shaky foundations. The complex political game continued after Charles’ execution. Charles II entered the picture, casting his shadow across all the major events in the 1650s, while Cromwell’s seemingly inexorable rise continued. He campaigned in Ireland and Scotland, but his greatest potential threat came from the Royalist invasion of 1651, though he quashed that with apparent ease. That left the Commonwealth in the clear, or so it seemed. Politics remained fractious at best and war with the Dutch did not help; Cromwell’s patience snapped on 20 April 1653 and he instigated a coup. What to do after that was the problem. The Nominated Parliament followed but was not successful. Venning leaves us with Cromwell as a King in all but name.
As a reading experience, Cromwell’s Failed State and the Monarchy is hard work, like joining a conversation with strangers half-way through. Venning goes straight into the weeds from the first page, and what follows is a seemingly endless list of questions and telegraphing sub-headings that create a sometimes disorienting stop-start effect. There are some good, flowing passages, in particular Cromwell’s operations in Ireland and Scotland, and Venning knows his material, which is fine for those already steeped in this period. This is therefore not a book for beginners or casual readers, but civil war era enthusiasts will find it useful.
BUY NOW