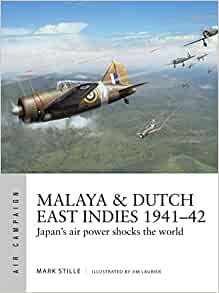 In Malaya & Dutch East Indies 1941-42, Mark Stille presents a cogent guide to the Japanese attacks on British and Dutch possessions in southeast Asia during World War II. His focus is on the air war but puts that into context with land and naval operations. The result is a satisfying read with enough technical information to keep the ‘airheads’ happy.
Before Stille begins his narrative and analysis, he provides a brief but handy chronology of the campaigns – they are brief because this was one-way traffic. As with all good campaign books, Stille surveys the respective strengths of the combatants, starting with Japanese air power. He discusses organization and tactics for the Imperial Japanese Navy Air Force and Imperial Japanese Army Air Force, and he notes that the two held no common doctrine or operational skills: they were in effect two separate air forces in a common cause. Their warplanes were not that great either, especially the bombers, but then Stille comes to their opposition, mainly Dutch and British, which was wholly inadequate in quantity and quality and manned by inexperienced crews – Stille barely has a good word to say about them, and rightly so. The United States Army Air Force was also deployed but lacked numbers and logistical support, despite having the best Allied fighter in the P-40.
Stille embarks on a narrative of the Japanese campaign plans, first with Malay then the Netherlands East Indies, countered by Britain and the Dutch defensive set-ups. He finds the latter incoherent and inadequate. As for the campaign, which is described next, the Japanese quickly established air superiority, and any hopes of British naval support all but collapsed with the sinking of the HMS Repulse and HMS Prince of Wales battleships (Force Z). Japanese successes on the ground allowed them to leapfrog their airfields, thus maintaining their aerial pressure. The Allies attempted to fight back, with some small success, but they were overwhelmed, particularly on their poorly defended airfields. After four months, the Japanese victory was total: numbers and better aircraft and crews paid off in the end. Stille demonstrates that the bravery shown by the Allied pilots was simply not enough.
As with all Osprey Campaign books, Malaya & Dutch East Indies 1941-42 is a basic but high quality guide to the subject. Stille’s text is lucid with clutter-free narrative and analysis, and he is ably supported by a wide range of black and white photographs, colour plates, and maps. He expresses an unmistakeable disdain for Allied preparations and efforts without denigrating the men involved in the combat, while clearly establishing why the Japanese won even with a fleet of mostly average warplanes. This is a solid effort and will be useful to anyone interested in the early Pacific War.
BUY NOW