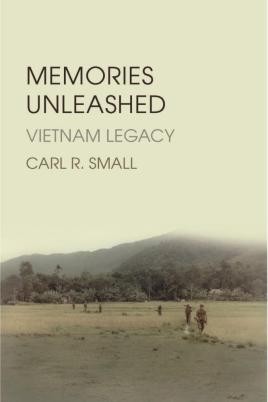 How do we ‘see’ the Vietnam War? Not as a Hollywood movie with beginning, middle, and end set to orchestral waves of emotion. No, this was the first media war, told in snippets on the nightly news, digested in discordant bite-size chunks over TV dinners and ultimately found unpalatable. We do not know many names from Vietnam, a war with apparently few heroes, just shared suffering and sacrifice among everyone involved. Carl Rudolph Small’s, Memories Unleashed reflects that cultural fragmentation with forty-three memories strung together into a patchwork of experience, with no names but all pack-drill.
Small joined the Marines in 1969 as a private, served 13 months in Vietnam, received three promotions, and came back changed forever. The marine, as Small calls himself, came under fire on his first night in Vietnam, saw his first casualties, lost his first friends. And for the next year he fought the elusive enemy and their booby-traps, and the environment; the heat, monsoon rains, rats, bugs, leeches, snakes, and a trapped tiger that stopped the war just for a moment. The firefights that run through the book were short, intense affairs of flashing light and noise; men died, others were wounded, then came the next mission and the next firefight. Along the way he found a puppy and wrote letters home to the girl he knew he would marry. That along with childhood memories and his religion motivated the marine to survive and do the best he could for his men. The marine describes the food, going for a swim, the dirty duty of latrine cleaning, giving lectures to new arrivals on how the enemy might kill them, and Christmas; he attended a Bob Hope show, sort of, then it was back into combat to become the hunter and the hunted. More fighting, more killing, then he went home, but Vietnam came with him and stayed in his nightmares.
Small’s memoir is not an enjoyable read, but it is a necessary one for those interested in how the Vietnam War was fought on the ground. Small achieves total emotional immersion for the reader, not an easy effect to pull off in a slim volume. He brings the sights, smells, and sounds of the war to the page, assisted by his snapshot kodak photographs of young men sent into a situation for which few were prepared. Small rarely considers the wider war and what it meant, concerned more for his squad and their small and often violent world. That might be a failing in other works on Vietnam, but here it adds to the intensity. Reading Small’s unleashed memories is an experience in itself.
BUY NOW